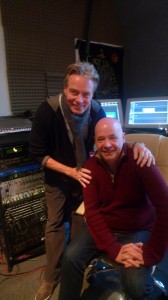 Since 2007 we have worked for the Edinburgh’s King’s Theatre on recordings used in the panto’s there. Shows we have worked on are Cinderella, Goldilocks, Alladin and Jack In The Beanstalk.

Today we had Allan Stewart recording the music and vocals for his spoof of the Go Compare ad on the new Cinderella show which runs from Saturday 3rd December.

The musical director Rich Anderson is a regular client of the studio. Richard also worked here on recordings for Songs Of Sister Act with various members of the cast.

Eddie Elliot from the cast of We Will Rock You also records here on original compositions he co-writes with our studio producer Iain McKinna.