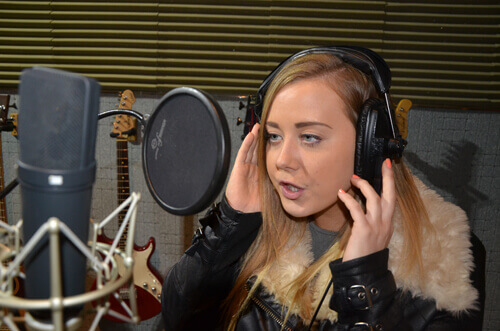 This super talented  26 year old Singer/Songwriter came to our recording studio in Edinburgh from Lockerbie for a Gift Experience, and on speaking to her after her session I discovered Chloe had been through a very difficult journey right from the word go, and from a very young age, she has battled with 4 separate illnesses at the age of 18 , Post Traumatic Stress, Borderline Personality Disorder , Depression, and Anxiety.

Music was the only thing that gave her a sense of comfort and joy and out of all that pain and sadness she remarkably started to turn it all around only by following her passion by singing, playing music and writing, by turning all her negative thoughts into poetry or songs which has acted as a source of therapy for her. So when I heard her newly recorded song called “This Time”    I was completely blown away, her song and singing had so much soul and really moved me almost to tears, with very positive and uplifting lyrics.

The song was recorded in the studio in a three hour session. Chloe started off playing the piano parts and our Producer Iain helped out by adding Bass, Drums and Strings to flesh out the arrangement. Considering we only had a ew hours to record everyhingt from scrrach the recording turned out great. Hear an extract from it here:

Chloe Kacedan says she started to play the piano at the age of 8 and was unable to get past grade 1, but with courage and determination this didn’t stop her, you often find that people with the hardest battles have so much more to say and so by deciding to write her own music and songs she has managed to lay some of her ghosts to rest and move on.

Her message in all her songs says Chloe,  “They centre around mental health awareness issues in the hope that they inspire people to never give up” with her most favourite line being “where there’s life, there’s hope”, with her main goal in life being to inspire people to rise above all their difficulties, what a great message to bring to the world, and what an inspiration.

If anyone deserves success she does , she is certainly someone to watch out for, an up and coming star who not only has so much to say but has an inspiring message to go with it, we hope she will be back sometime as I can’t wait to hear her next track.