We are experienced in working with children of all ages and our studio experiences have proved valuable for children with special needs. To discuss your own school or organisation’s requirements phone 0131 556 4882 or contact us

CLIFTON HALL SCHOOL “YOU RAISE ME UP”.

Recording this project was logistically tricky. First we went to the school and recorded three separate  groups of 20 kids per school year. We took over one of the classrooms and set up the mics and mixing desk and recorded each group. We went back to our studio to compile that. The following week the best 20 singers came into the studio to record separate parts. All the recordings were then mixed together to create the end result which was used in a film to promote the school that year.

“Clifton Hall School worked with Iain and his team at the Royal Mile Recording Studio in March 2010. We wanted to record our junior and senior choirs performing the song ‘You Raise Me Up’. We had a fantastic experience, which was tailored to meet our specific needs. Iain and his team were very professional, and easy to work with. They were very patient with our students and made them feel at ease straight away. We would definitely recommend the Recording Studio for school projects and we plan to work with them again in the near future!”
ROD GRANT. HEADMASTER of CLIFTON HALL SCHOOL-

“Amazing to see what could be done and produced so professionally and so quickly! The girls were made really welcome, and the studio workers were really friendly, energetic and supportive. They adapted to the desires and ideas of the girls, and tried out different approaches for including everyone in the ways they wanted. I’d recommend it to others for sure. Brilliant experience and session for a youth group. Thanks again”. – WILL GOLDING

Sandra has cerebral palsy and was facing a major operation. Inspirational charity Dreams come true organised for her to visit our studio as she loves singing. So determined was she to make her dream come true, she bravely negotiated our stairs and thoroughly enjoyed her experience.

“Hi Iain and Kirsty, I have just spoke to Sandra and  Eryka and they told me what a brilliant time they had with you yesterday.

They wanted me to thank you for being so welcoming and enthusiastic.  They both found it really interesting and were really impressed how knowledgeable you were (I took this as a given!). Thank you from me and the charity for making their day so special.  As you might know, Sandra is scheduled for an operation shortly which will mean she will be laid up for a bit so this came at just the right time”. 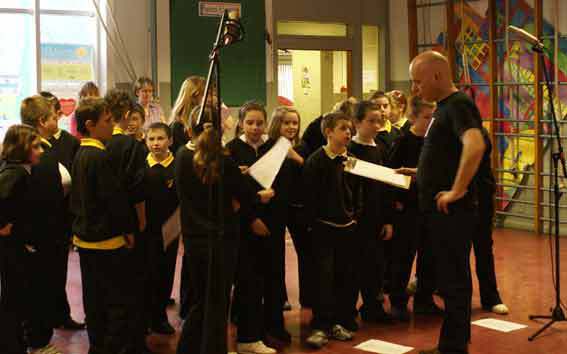 This project was created to raise the self esteem of pupils from the school and to contribute generally towards an experience of the world of work. We went to the school in Denny, Stirlingshire to record two groups of 45 kids. We then selected the best singers to come to the studio in Edinburgh to embellish the production with studio quality recordings. The result was an inclusive and exciting experience for all the kids involved.

“I want to say how very much our pupils, parents, staff and community members enjoyed the recent recording session in school with a group of approximately 90 pupils. All who were keen and engaged in the activity. This was a fabulous experience for all concerned, particularly our pupils. You gave them an insight into the sound recording process, as well as focusing on your job, which linked so well with our approach to the World of Work.”

MARY CONNOLY – Head teacher of Nethermains Primary School in Denny for the recording of Max In The Middle for NHS Direct in conjunction with Tom Houston.

“Thanks again for today which was great fun! You are both so easy going that it helped everyone to relax into the session and enjoy it more”.. –  ANGELA TURNBULL

Groups of kids from all over the UK were funded by the charity First Light to make a short film about any subject they liked and were judged by serious Industry professionals for their work prior to an award ceremony at the Odeon In Leicester Square London.

We created the soundtrack for the presentation which you will hear on this short trailer. Other contributors included Alex Zane, Kate Winslet, Alan Parker, Minnie Driver, Daniel Craig and Barbara Broccoli and too many others to mention.

http://www.youtube.com/watch?v=DIdLVs1Q1iI
“My name is Rand Prichard and I am a song writer and a certificated music teacher from California. While I was teaching music in primary schools in Scotland, my wife and I wrote a song entitled “Peaceful World”. The song had been well received in the schools and my wife and I felt that it should be professionally recorded and we asked Iain McKinna owner of Offbeat Music Production to do the recording.

Iain is an exceptionally gifted musician and he created a superb professional backing track for the recording. We then organized to have our selected primary school singers come to his studio to do the recording. He was wonderful with the children and calmly and professionally worked with them to get the best sound for the recording. His lovely wife added some superior background vocals and he spent a great deal of time mixing the tracks to perfection. We were well pleased with the final product.

My wife and I returned to California and I incorporated the “Peaceful World” song into an original video and posted it on YouTube. We have received almost 10,000 hits in a year and many people from around the world including many teachers from Canada and the US have requested the song for use in school concerts and other venues. We even had a teacher from Tibet request the song to be sung at a very prestigious music festival! Iain McKinna is great to work with and you can rest assured that you will get the highest quality professional product from him.”

We have recorded several songs with Sam. This very quickly produced video which was filmed on a phone won the best film award for International Autism Awareness which took place in Canada in 2011.

“As the mother of a special needs young adult I have to be very particular who I allow to be associated with my daughter Samantha E. Last year I approached the Studio for a few recordings and was very impressed with the fact that Iain McKinna did everything he could to help make the experience a very positive one for my daughter. I will continue to allow her to work with the studio as I now feel confident that she is in good hands.” – SHARON RUDERHAM

Garvald is registered to provide accommodation and day services for adults with learning disabilities. A small group came along to the studio to record a few songs.

“Our experience at the studio was one that we won’t forget. Everyone had a great time and the recording was done very professionally and beyond our expectations. Very cool!” – Reghardt Debeer

Colin has Downs Syndrome but it hasn’t stopped him living life to the full as can be seen in this video made by his sister Alison. He came into the studio with hs Mum, Dad along with Alison to record Any Dream Will Do from Joseph And His Amazing Technicolor Dreamcoat. After singing the vocal the family joined in on the chorus before Alison filmed a bit of the video in the studio. The rest of the filming was done after the event.

“My family and I took my brother Colin to the Royal Mile Recording Studio for his 30th Birthday. We all had a fantastic time and Colin was in his element! The staff were so friendly and encouraging and we would highly recommend the studio.” Alison Telfer.