What happens at a Kids Party

Exactly what does happen at our recording studio kids party

We have hosted many a Kids Party over the years at our recording studio here in Edinburgh and have a fool-proof, flexible, tried and tested formula that will make all your children of any age group – as long as the youngest kids can read lyrics – leave with big happy smiles on their faces.

This activity is for kids that love to sing as well as for kids that have never sung before and want to have a go. The party starts before the event with the birthday girl/boy having picked their favourite song that they like to sing along to. The song lyrics are also printed out on sheets before hand so if a child does not know the song very well they can easily pick it up and sing along to it, the only criteria here is only that the child loves to sing. We supply mp3 files of the song and CDs can be ordered for £4 each for those who still have a CD player

Everyone is encouraged to have a go! 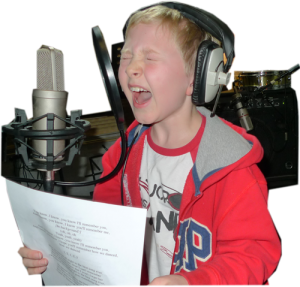 We usually start the party with getting the kids to sing along to the chorus as a group which is a great way to warm up. Having sung through the part a couple of times they are then ready to record it, guided by the head producer. This is usually a big moment for them as most of them have never been in a professional recording studio before so by the time they are ready to record it the excitement level goes up a notch. The kids are always very keen to hear the result at this stage which gives them the confidence to continue.

Once they are all happy with the result they are then split into smaller groups to have a go at singing with the headphones on to for the next parts of the track, which can be anything from a couple of lines to a whole verse depending how many kids are wanting to have a go. 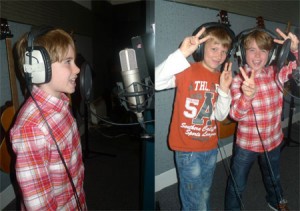 Of course the birthday girl /boy always gets first choice as to who they want to sing with, as by then they have overcomes their nerves a little  and realised this is so much fun singing with some of their pals , the birthday girl/boy are then asked if they would like to sing a wee solo spot on their own with the headphones on,  guided again by the head producer, and if they are brave enough to try this can be a really confidence boosting  experience for them as they find out what their voice sounds like for the first time and so can successfully impress all her friends and family by having a go. If they are confident at trying to sing the part which in most cases they are, it is the most fantastic and rewarding experience for them and will be one of the first building blocks in overcoming fear, and if they don’t want to then that is fine to as they can sing with their favourite friends instead, or even with a parent, if they are allowed by the kids to take part. 🙂

A learning experience too! 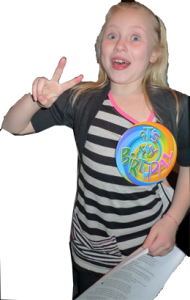 Soon all the kids are wanting to have a go and we have found sometimes even the most shy kids are putting their hands up as hearing themselves with a proper headphone experience is just so exciting. It’s how all their favourite superstars do it and it makes the child see that it’s not nearly as daunting as they thought it would be as this is all about having fun as well as educational. As they learn to understand the recording process… not everyone gets it first go and it is important to understand that even the most successful superstars don’t either. But the more you try the better you get so hitting those golden moments which makes them want to do it again and again.

And so once the track has been successfully recorded and the birthday girl/boy  is happy with the result,  the track is ready to mix down and while this is happening there is time for a posing photo shoot which is full of fun and laughter as they are allowed to pose with all the professional instruments that are around in the studio and have the photos taken of them in large and small groups. These can be the most priceless moments for any party, as the one thing that kids are so good at is posing it just comes so naturally to them and all the photos are given to the Mum or Dad on a disc for them to take away at the end and so recording for all time this amazing memory of the fun time they all had together which are just such priceless and precious moments.

But the kids party is not quite over yet, as after all that fun they are now ready to have their fantastic party snacks which the parents have brought along and sometimes even a birthday cake. while they all listen to the track and  enjoy the snacks which makes it the perfect ending to this perfect and very unusual recording studio party.