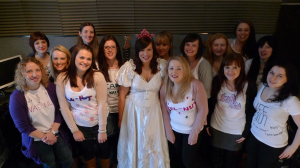 Hailing from the west of Scotland, Kirsty and 14 pals came to the studio on Saturday to kick off their hen party in Edinburgh with a recording studio experience to remember. Their chosen group name was KP & Her Assortment of Nuts 🙂

Kirsty immediately change into her party dress which boasted a very long train which she did her level best not to trip over.

The girls took on Bohemian Rhapsody by Queen and had a great laugh as they started off with rehearsals in the studio control room prior to going into the studio to record their performance. This is the fourth party we’ve had who have taken on this song and it always surprises us how it turns out as it’s not exactly an easy choice. Still, they bravely worked their way through the arrangement. Some girls decided to do the backing vocal parts which cross over the main vocal and the air guitar antics during the solo sections had us all creased with laughter. 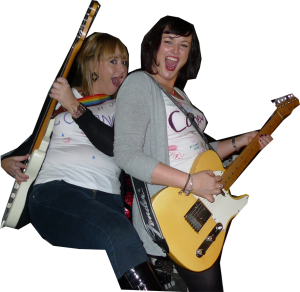 After that the second song choice was ET by Katy Perry. Again, not exactly an easy song but after the challenging Queen track it all seemed relatively smooth by comparison. It’s amazing for us to see the pure joy on peoples faces when they are singing their hearts out in a group. All inhibitions disappear, especially after a couple of glasses of bubbly. 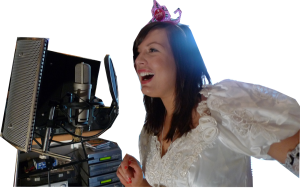 At the end the group were delighted when we presented Kirsty with her bottle of champagne which is included in the Gold experience.

We wish Kirsty all the best for her forthcoming wedding. She certainly won’t forget her recording studio experience in a hurry!

Kirsty wrote in after the event to say “We had an AMAZING time at Royal Mile Recordings – definitely a highlight of the weekend. Still smiling from the fun we had! A definite must for groups of hens, stags, birthday parties….or just to brighten up a boring Saturday! Thanks to both of you who made it so enjoyable – you two are the sweetest!”