Many of the experiences we have here are people singing to backing tracks which works really well. But In this case Singer and Guitarist STEVE TORBET received a 4 hour experience and he decided to bring in a few of his best mates for a 4 hour Mega session band experience.

The best way to start a session is for some is to have a nice cup of tea! Then once the guys were plugged in tuned up and had the right volume in there cans they were ready to rock .. And rock they did! Starting with DONT GET FOOLED AGAIN by The Who ..they had a few run throughs and when the head producer got the levels sorted they were finally ready for their first take    which they get through amazingly well especially as they had not played together for a while. Then our producer worked his magic and when they were all happy with levels for the Drums,  Bass and lead Guitar they started laying down the backing of Guitar, Bass & Drums along with a Guide Vocal. The Acoustic Guitar, Electric Guitar overdubs and Vocals were to be added  later.

And so without any further ado, they had their first backing track recorded and then it was on to track number 2 – ALL MY LOVING by the Beatles. After a few run throughs they were happy with the warm up and started to go like a well oiled machine.  The levels were all sorted and quite quickly they got the take they want.
So they were keen to get onto their next track –  I SHOT THE SHERIFF the Eric Clapton version of the famous Bob Marley song.
They started  there first warm up and after a few tuning issues they finally got rolling and got a take down,  but they were not happy so onto take 2 ..then take 3 etc – so having warmed up they got to grips with the track and finally managed to get a take that they were happy with ..sadly there is only I hour left… time is  running out… and they still have to put the Acoustic Guitar and vocals down! .. So they start by putting down the backing vocals as a group which goes really well and adds a certain polish to the song. Then the second Electric Guitar goes down played by  Steve’s mate Ian  then they lay another third guitar part, and then Steve adds his main vocal  along with another guitar which ends up in a spinal tap moment. What a laugh they all had as Steve gets his last bit of guitar down! the first time he practised it he played it perfectly but when the red light went on he took quite a few takes to get it right… but the guys were there to have fun and by this time they were having a ball! And then it was onto finishing DONT GET FOOLED AGAIN .. Steve gets his vocals down really easily accompanied by Ian on guitar .. Vocals are not quite right so Steve has another go and gets it down in one take.
Recording three songs as a band in just four hours is a tall order, especially when un-rehearsed so the guys came back the following week and finished off the songs to their satisfaction in just a couple of hours.

Listen to this short excerpt from WON’T GET FOOLED AGAIN by Natural Disasters!! 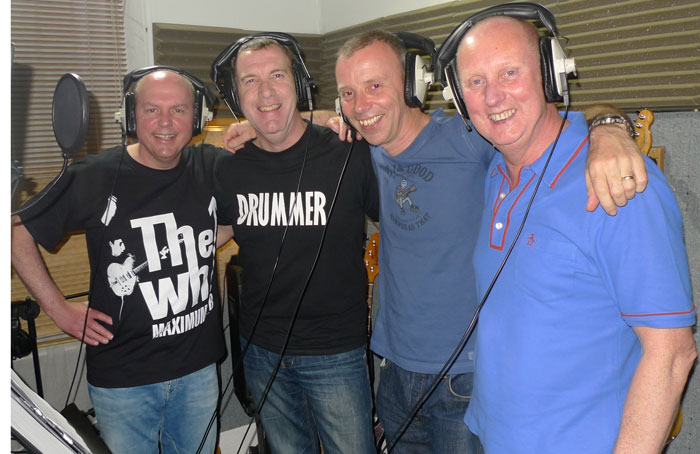