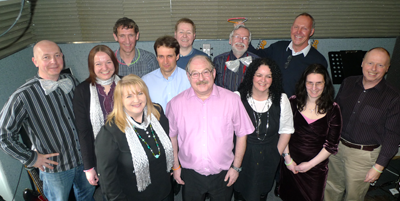 Hailing from Glenrothes SemeFab Ltd came into the Royal Mile Recording Experiences studio recently for a Team Event. There were 12 participants and we split them up into two teams of six to compete for the coveted prize of a bottle of champagne.

Team 1  (named The Semes)  decided to have a go at We Are The Champions by Queen and Team 2 (named The Seme Tones) plumped for The Greatest Day by Take That. 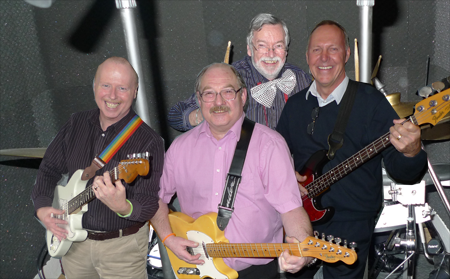 At rehearsal stage ‘The Semes’ did not sound like champions it has to be said but after some serious coaching by our producer Kirsty they began to shape up well. The Seme Tones also took a while to get going and various vocal parts were allocated to guys and girls by producer Iain. After tossing a coin ‘The Seme Tones’ were the first to record their song and two complete takes were recorded. Then it was the the turn of ‘The Seme’s’, who were beginning to resemble champions of sorts. 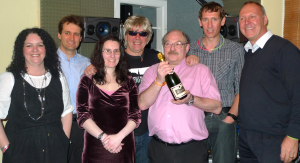 THE WINNERS – THE SEME TONES

Once the tracks were completed head producer Martin Wigley was invited in to judge the recordings and after taking into considering tuning, performance and dress sense ‘The Seme Tones’ were declared the winners and therefore the singers of We Are The Champions were declared the LOSERS!!!

After hearing the resulting recordings and seeing the pics the next day, Claire,  the organiser of the event wrote in to say “Thank you so much for a really enjoyable day out at the Royal Mile Recording Experience.  The whole event was professionally run and a huge amount of fun.  Both Iain and Kirsty really made the event by keeping it light hearted and providing lots of laughs but maintaining a smoothly run operation.  Everyone was put at ease, even those who were a bit nervous about the singing due to lack of natural vocal ability!  We would highly recommend this for anyone looking for a fun, unique day out with a group of friends or as a team building exercise with a difference.  Once again, many thanks for all of your efforts.”