Sharon Blows Everyone Away Singing At her Hen Party

A couple of weeks back we hosted an amazing hen party for Sharon Taylor who had no idea she was coming to royalmilerecordingexperiences.co.uk in Edinburgh for her Hen Party. She arrived in a Snow White outfit looking really beautiful with all her dwarfs dressed up in dwarf masks/hens. 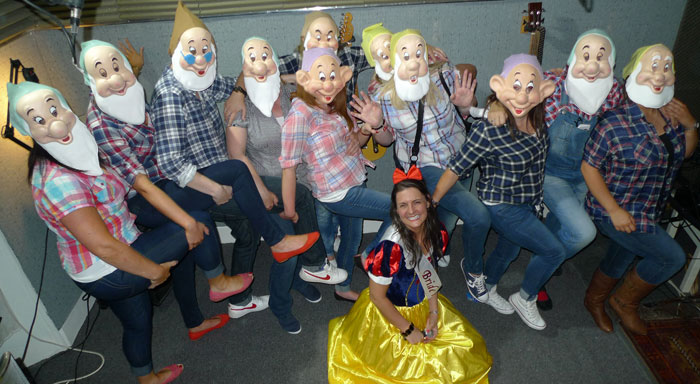 They all loved singing and got right into the the singing vibe almost as soon as they had arrived. But the bride to be wanted to do her solo song first and sang PART OF THAT WORLD by Walt Disney from the film the Little Mermaid. She got into the spirit right away and to our amazement sang the whole song in one take – which even professionals find hard to do – and what a great job she did,even she was surprised.
She really had such a great time singing it and and she came out of the recording room to loud applause from all her dwarfs/hens who had by that time discarded there dwarf masks and were very eager to have a go at singing  their next song LETS HEAR IT FOR THE BOY – by Deniece Williams, it was the perfect group song to pick.
A few of the hens had said at that point that they where dreadful singers and that they couldn’t sing a note but they all started to sing together and sang there hearts out so the hens that had said they where not great singers turned out to having voices that where not as bad as they thought they were, and the not so confident singers soon got drowned out by the confident ones and so once the producer had added  in a bit of reverb to the mix they all sounded great Of course having a glass of their favourite drink really helped to get them into the mood, they where all so happy to hear the end result. After they had done the singing, the producer had to spend a bit of time mixing the track and to print their CD’s – which allowed enough time for us to take some group photos of them posing with the guitars and the percussion gear which they all really had fun doing.
And so they all went away with a CD each and photos of their session which will be a fantastic memory of them all to have having fun in a recording studio for the very first time. 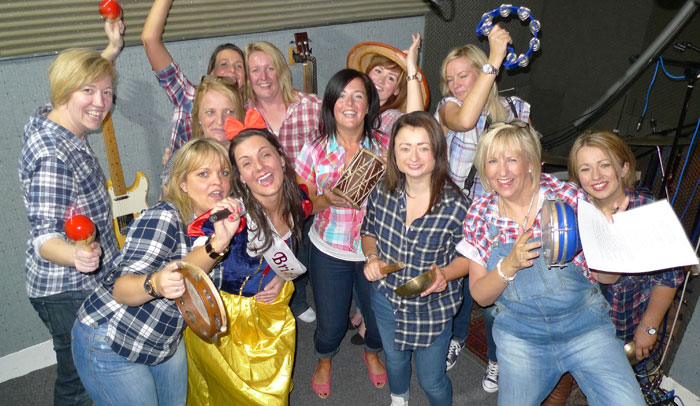 If you are looking to buy your favourite drink at a reasonable price for your session then don’t go to the off licences in the high street they are selling at tourist prices. Instead go to the Tesco Metro or Sainsbury’s which are very close the studio. There you will easily get what you want with out being ripped of. Here is the link so you can find it easily….  http://www.tesco.com/store-locator/uk/?bID=6055