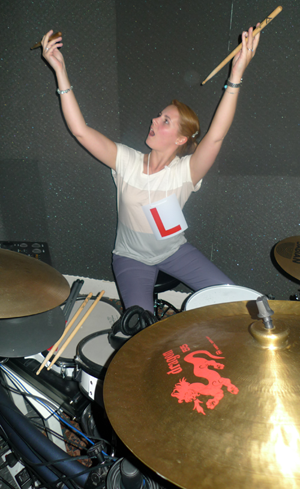 Stuck for hen party ideas? How about a recording studio experience in Edinburgh’s Royal Mile! Hailing from Aberdeen with one girl from Lochgilphead, Shelles Belles came in to the studio on Saturday morning and despite a very late night partying the girls were on great form. They chose interesting tracks we hadn’t done here before but both were great choices. The first was White Wedding by Billy Idol and Sister Sledge’s We Are Family. 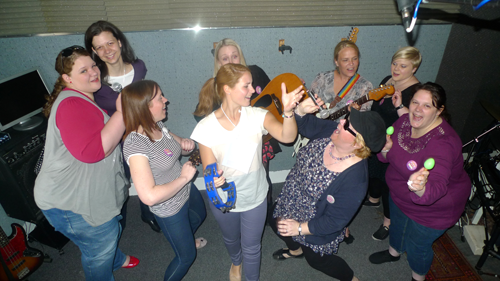 After a rehearsal in which we went over the songs a few times it was time to get in front of the microphones and the girls did not shy away from them as can be seen in the pics!!

We will be recommending both tracks to future clients who are stuck for their song choices. The party was organised by Lisa Uren and all were delighted with the result. Lisa sent in this amazing testimonial ” What can I say to do our experience justice… phenomenal maybe? You were both fab from the second we walked through the door to the minute we left, every one of us had such a laugh and we will never forget it!”. 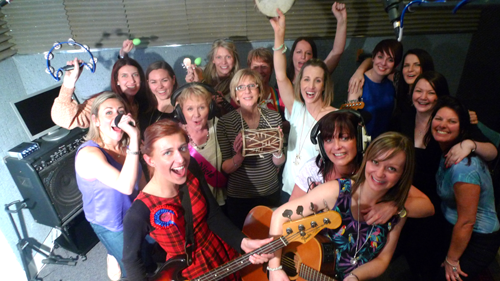 We also had Vicks Chicks which included 23 of bride to be Victoria Collar’s friends in on Saturday for an amazing hen party experience here in the Royal Mile Recording Experiences studio. The girls had come from all over England and a few pals from Edinburgh also came along to watch the proceedings. 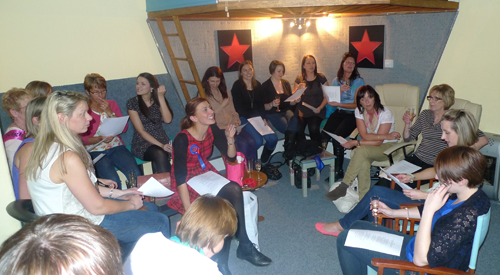 The two songs chosen for the recording were Living On A Prayer by Bon Jovi and Holding Out For Hero by Bonnie Tyler. Living On A Prayer is a great choice of song but the key change at the end is incredibly high. Normally we have to bring the pitch of the track down but in this case the girls pulled it off brilliantly after a few takes. After that the Bonnie Tyler track seemed a breeze although a few glasses of bubbly didn’t hurt 🙂

Victoria wrote in after to say ” A massive thank you to the Royal Mile Recording Studio!!!!! I have just returned from an amazing hen weekend in Edinburgh and our highlight was our experience there!! The girls thoroughly enjoyed themselves and found it a new and interesting experience, we were made to feel like celebrities and can’t thank the team enough for their hospitality. We are already trying to find an excuse to come back!!! Lots of love  Vicks Chicks!!!!! xxxxx”.