14th December 2011  – The amazing thing about recording studio gift experiences is that the person buying them brings the most amazing talent to our attention here at the studio. Singers who otherwise may not have the confidence to book into the studio can actually find out that they are much better than they thought they were.

Since the amazing 80 year old Eddie session a week past Sunday, we have had three more fantastic sessions. 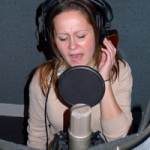 The first, on Wednesday was Joanna Pyrak who is from Poland but lives and works in Edinburgh. Her boyfriend Fraser from Dundee bought her a Superstar Experience last Xmas. She did amazing versions of the four songs she requested and each choice showed a different aspect to her singing. We particularly enjoyed Don’t Know Why but her other recordings – Daydream Believer, Black Velvet and Mercy were equally good.

We were impressed by Joanna’s professional approach to the session. She had done her homework on the songs and it showed in the final result. She told us after the session that she had been put off singing by a bad X-factor audition experience. It was great to part of the process in helping restore her confidence in her singing after the recording was over.

Listen to an excerpt Dont Know Why

Next on Saturday was Michelle Boyd from Glasgow. Her husband Martin had bought her a Superstar 4 song 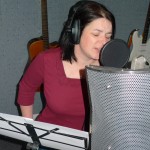 experience just a week earlier. She regularly sings karaoke and she brought her friend Alison Porter along as well as her daughter Shelley Anne. 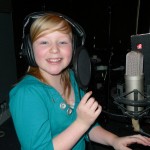 Michelle’s daughter Shelley Anne has a go behind the microphone.

Michelle has a gutsy rock voice which she blasted out on Meat Loaf’s “Two Out Of Three Ain’t Bad”. But her version of “Nothing Compares” was stunning. She has a voice that’s immediately identifiable and has the gift of making the songs hers.  Then she surprised us with her sensitive and emotionally charged version of ” I Do Love You”.

We hope Michelle keeps singing as she has a great voice-  somehow we think she definitely will. LOL 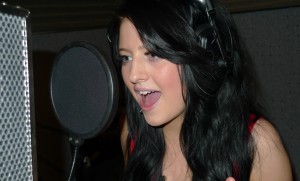 Straight after that we had a visit from Amelia Crowther from Boness, who’s Mum had bought her a Taster experience. The 17 year old excelled on her incredible acoustic version of Bruno Mar’s hit “When I See Your Face” It was fantastic to witness her first recording experience as she seemed to us to have been singing in the studio all her life.  It reminded us just how priveleged we were to be in the position we are here.

It’s great recording new artists who are encouraged by friends and family to have a go at making recordings.