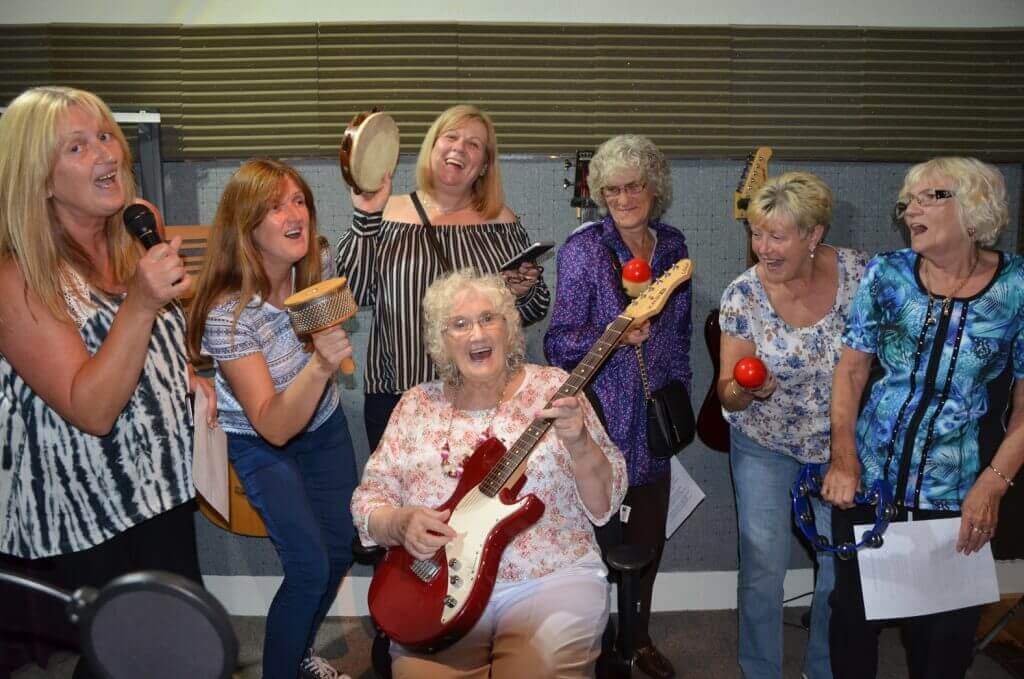 This really delightful group of woman and one grandchild called the Stairheid Choir (the Reynolds family from Fife) turned up at the studio for Birthday Party event as they all really loved to sing and often sang together every week as a family. The group comprised of 3 mature ladies, their 3 daughters and one grandchild.

They were a bit unsure when they all arrived as the birthday girl Susie had just turned 80 and was struggling with a cold so was not very confident about singing when normally she would have had no bother singing her heart out. But this was a rare opportunity to gather together for a birthday celebration and have a fun bonding experience which would be remembered for the rest of their days.

The birthday girl was set up with the headphones on to sing her way through the track but she was struggling to keep in time with the original vocal on the track as her voice was rather affected by the nasty cold she had unexpectedly suddenly come down with and according to one of her daughters had even given her a stiff brandy before arriving to help her vocals chords loosen up.

Susie normally sang acappella, she had picked two of her favourite songs to sing she started with  “Hold Me In Your Arms” by “Doris Day”  so this was a totally new experience singing with the head phones, especially with a cold, to a backing track, but she bravely decided to keep going, so after a couple off attempts it was decided by the family to get her to sing the track without the backing as she knew the song really well and quite often sang it that way and so was quiet happy to try. She did a great job considering the cold was affecting her vocal chords a little , but after she had recorded it it was decided that she might as well try singing it again with the backing track as her voice had started to warm up a little, and then the head producer suddenly had a great idea to lower the key which made all the difference and so unusually she ended up with two versions of the track that Susie and the group where all really happy with. This was a perfect example of how you can turn things around in a session as they might not have ended with the best results, as once she had sung through the track again a take was captured showing of her lovely voice and even though it wasn’t the perfect take it was not a problem as this had become more about the  enjoyment of singing and being together as a family rather than a perfect result.

And so it was onto another “Doris Day” track called “The Black Hills off Dakota” where the group had decided that it would be great sing the next track all together and so they all gathered together to sing in front of the microphones  …..it was a brilliant group track that they had all sung many times before but this time recording it for a great memory for all their lovely family to hear for all time, the mood in the room was so joyful and uplifting as they sang through the track the buzz of singing together was so special  to witness.

It was a real honour to be in the room taking the photos while recording this special moment which made them all feel very elated they could not believe what a fun time they where all having. This really had been a special unique time for them all and a fantastic way to celebrate a very special 80th birthday. There are not many activities that include all the different generations these days, our lives are so filled with the world of computers that its so easy to forget sometimes how important it is to have bonding experiences with your nearest and dearest, and this was the perfect place to come for that.

After they had recorded all the song they all had a very funny time having photos taken off them all as a group and the smiles on Susie’s face was priceless surrounded by all her beautiful family this was an experience that was so joyful and would be remembered for all time.