This rather lovely group of hens arrived at the studio from the Helensburgh area of Scotland to make a pop video for the bride to be Suzanne. They arrived clutching there plastic blow up saxophones, guitars and mics, but as the studio was full of percussion equipment and real guitars and mics it proved a little unnecessary, as why have plastic when you can have the real thing!! 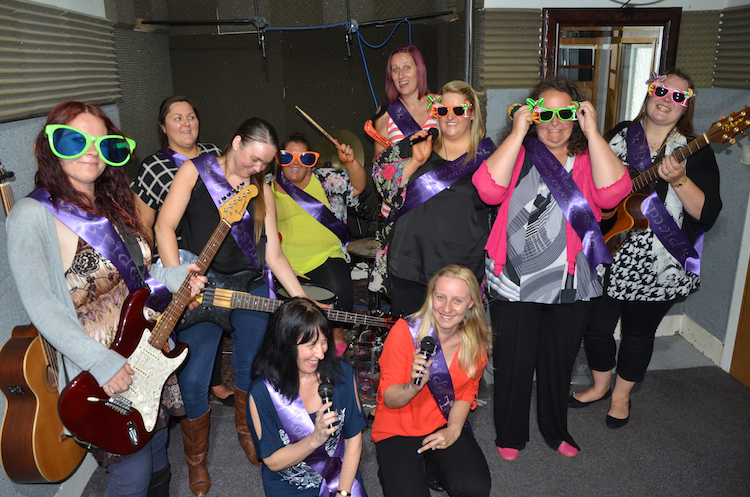 The hen organiser Angela had picked a really brilliant song to sing by Pink – Raise Your Glass , it immediately got  the hens singing as it was the perfect song for a hen party and soon they were all enjoying the fun of singing together as a group but the party had only just started and as it was being filmed it required them to sing it a few times with each take getting better and better, and so the bonding process had begun.

Then suddenly the  hens put on there mad specs and as the cameraman started filming the different takes they started to relax. It was such a fun song to sing and once they had got the chorus recorded and filmed it was soon time for the gorgeous bride to be Suzanne to sing the first verse. She really wasn’t looking forward to it initially as she considered herself to be a terrible singer but as is quite often the case when she started to sing, her fears were totally unfounded and it turned out she had a really lovely voice. She had a low range to her voice which really suited the track and after her first ever attempt at singing professionally with headphones on it was a great result and it ended with a well deserved applause from the rest of her hens.

And so it was time for the other hens to have  a go singing in groups of 3, 4 and 5 some felt daunted at the thought but they soon discovered it was  actually terrific fun,

The video was now taking shape and it was now time to film and sing the finale, they were right in the mood now to let there hair down and have great fun behaving like rock chicks gyrating and rocking to this great track, raising there glasses at every opportunity when the chorus came round, it’s so great to let your hair down with your best mates and family and to have so much fun, that they would remember this for the rest of there lives.

Well they had finally recorded and filmed all there parts but there was just one last thing left to enjoy a surprise desert treat followed by one last photo session of them all larking about posing with the guitars, drums and percussion instruments it had been a really joyful and unexpectedly fun experience and so they all left with big smiles on there faces clutching there very first CD of their track which would no doubt get a few laughs from all there family and friends and especially all the hens that participated.